To fry Beanes.
Take your beanes and boyle them, & put them into a frying pan with a dish of butter, & one or two oynions, and so let them frye till they be browne al together, then cast a litle salt upon them,
and then serve them forth.
A Proper Newe Booke of Cokerye, f8r (around 1557)

This is an interesting recipe. Beans were generally considered indigestible, fit only for peasant constitutions (Albala, 2003, 27). And yet they are used in this book compiled by Matthew Parker, who was Master of Corpus Christi College Cambridge, and later Archbishop of Canterbury. He was a passionate book collector and very learned, and presumably would have eaten only the best foods. For this reason, I have used string beans, or French beans, and cannellini beans, in this dish. New World beans appear to have been adapted into European cookery much quicker than other New World vegetables, probably because they were so similar to the broad beans that were so well known (Albala, 2003, 136). Even so, they would have been something of a novelty. 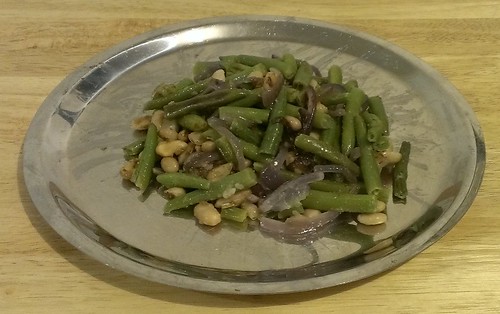