Take neshe chese and pare hit and grynd hit yn A morter and breke
egges and do ther to and then put yn buttur and creme and mell
all well to gethur put not to moche butter ther yn if the chese be fatte
make A coffyn of dowe and close hit a bove with dowe and collor hit
a bove with the yolkes of eggs and bake hit well and serue hit furth. Gentyll manly Cokere (MS Pepys 1047, c.1500)

Take fresh cheese and cut it and grind it in a mortar and break eggs and thereto and then put in butter and cream and mix all together well. Do not put too much butter in if the cheese be fat. Make a coffin of dough and close it above with dough and colour it above with egg yolk. Bake it well and serve it forth.

Lent is still very significant to many Christians, but during the medieval period it was probably the most important religious observance of the year. It was a 46 day period, starting on Ash Wednesday and ending just before Easter. It signified the 40 days Jesus spent in the desert, and people were meant to spend the time abstaining from luxuries, in penance, prayer, and fasting. There were strict rules regarding the food that could be eaten – no meat of land animals, no milk, and no eggs.

That this tart is called “The Tart out of Lent” is an indication that this tart was a particular favourite to be eaten once Lent was over. It is a very rich, indulgent tart. 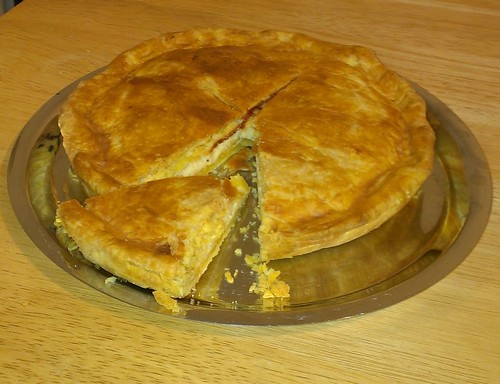 2 comments on “Tarte owt of Lente”