How to butter a Colle-flowre.
Take a ripe Colle-flowre and cut off the buddes, boyle them in milke with a little Mace while they be very tender, then poure them into a Cullender, and let the Milke runne cleane from them, then take a ladle full of Creame, being boyled with a little whole mace, putting to it a ladle-full of thicke butter, mingle them together with a little Sugar, dish up your flowres upon sippets, poure your butter and creame hot upon it strowing on a little slict Nutmeg and salt, and serve it hot to the table. John Murrell, A Booke of Cookerie, 1621.

How to butter a Cauliflower
Take a ripe cauliflower and cut off the florets, boil them in milk with a little Mace until they are tender, then pour them into a colander, and let the milk run clean from them, then take a ladle full of cream, being boiled with a little whole mace, putting to it a ladle-full of thick butter, mingle them together with a little Sugar, dish up your florets upon sippets, pour your butter and cream hot upon it, strewing on a little sliced Nutmeg and salt, and serve it hot to the table.

Although this is technically a seventeenth century recipe, the ingredients and methods were available in the sixteenth century, so this recipe would not be out of place at a late Elizabethan SCA feast.

I first found this recipe in Madge Lorwin’s Dining with Shakespeare. (p 103) 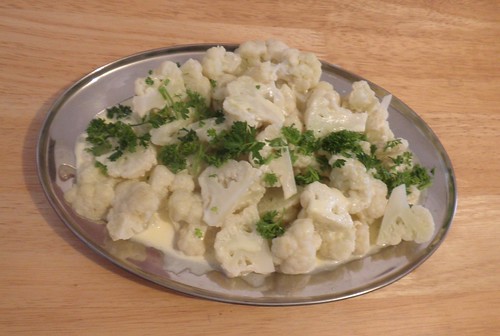