To make a tarte of spinage.
Take Spynage and perboyle it tender, then take it up and wrynge oute the water cleane, and chop it very small, and set it uppon the fyre wyth swete butter in a frying panne and season it, and set it in a platter to coole then fyll your tart and so bake it. A Proper Newe Booke of Cokerye (1557).

To make a tart of spinach.
Take spinach and parboil it tender, then take it up and wring out the water clean, and chop it very small, and set it upon the fire with sweet butter in a frying pan and season it, and set it in a platter to cool. Then fill your tart and so bake it.

This is possibly the first mention of spinach in print in English; a 1654 herbal noted it was not long introduced to England (Dalby, 2012, 101). It was probably one of the many foodstuffs introduced through increased contact with Spain, where it was introduced by the Arabs.

Spinach tarts were clearly something of a novelty, as there are multiple recipes in different recipe collections. I feel for this reason they should be on the menu of any Tudor era feast, and I shall be featuring several different recipes. This is one of my favourites, as it is the most savoury tasting and thus the most compatible with modern palates. It is also very easy to make vegan friendly and is already vegetarian friendly. 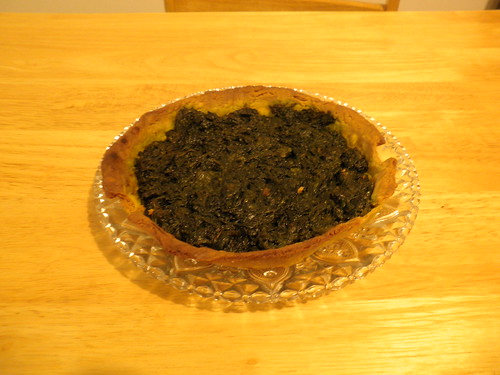 Click on the links below to buy direct from The Book Depository.
Ahmed, Anne (ed) (2002) A Proper Newe Booke of Cokerye
Dalby, Andrew and Dalby, Maureen (2012) The Shakespeare Cookbook