Take suger and Cheries a like Quantity put as much water to yor suger as will wet yt, and boyle yt till yt allmost come to suger again, then stone yor cherries and put them in and two every pound of them put 3 spoonfulls of the Juice of Red Respice wth them let them boyle so fast that the sirop may boyle upp above the Cheries till they are boyled enough, sciminge of yt as the scum ariseth, as soone as you take them of the fier put them presently into a dish of either silver or earth there let them stand until they bee almost cold then put them upp. (Elinor Fettiplace’s Receipt Book)

Take equal quantities of sugar and cherries. Put as much water to your sugar as will wet it, and boile it until it almost come to sugar again, then stone your cherries and put them in. To every pound of cherries put 3 spoonfuls of the juice of raspberries. Let them boil so fast that the syrup may boil up above the cherries until they are boiled enough, skimming off the scum as it rises. As soon as you take them off the fire put them into a dish of either silver or earth. There let them stand until they be almost cold then put them up. 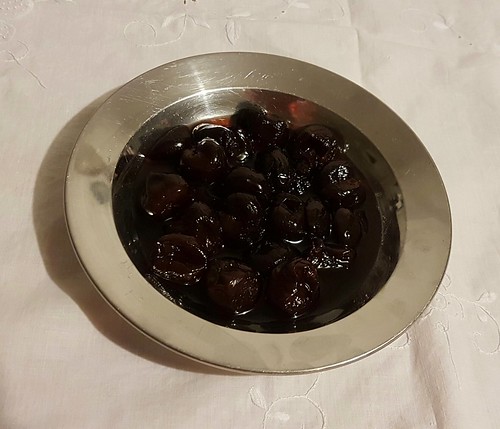 Click on the links below to buy direct from The Book Depository.
Spurling, Hilary (2011). Elinor Fettiplace’s Receipt Book