TO MAKE MARMALAD OF APRICOCKS
Take to a pounde of Apricockes a pounde of suger wanting 3 ounces wet yor suger in water & boyle it until yt come to candy then pare the plumes and cut them in quarters so put them into yor suger let them boyle till they will cut still stiringe and breakeinge them as fast as they boyle, when yt is enough put yt in boxes but cover yt not until yt bee cold Elinor Fettiplace’s Receipt Book

To a pound of apricots, take a pound of sugar. Using 3 ounces of water wet your sugar and boil it until it comes to candy, then pare the fruit and cut them into quarters. put them into your sugar and let them boil until the mixture can be cut. Stir and break them as fast as they boil, and when it is done put it in boxes but do not cover it untl it is cold.

When I first read that Elizabethan marmalade was a solid jelly (Sim, 2005, 158) rather than the somewhat gloopy substance we’re used to today, I was intrigued and began to look for recipes. This recipe from Elinor Fettiplace describes how marmalade was often presented as gifts in little boxes. 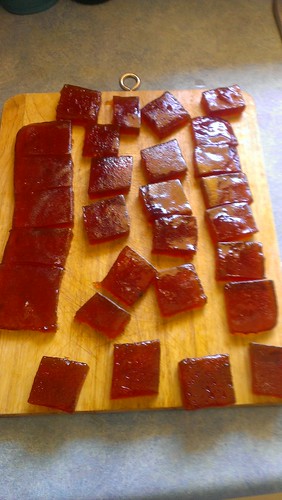