Ginger Bread.
Take a quart of honey and seethe it and skim it clean. Take saffron, powdered pepper, and throw thereon. Take grated bread and make it so stiff that it will be cut in slices. Then take cinnamon powder and strew thereon enough. Then make it square as though thou wouldst slice it. Take, when thou have sliced it, and cast box leaves above, stuck thereon in cloves. And if thou will have it red, colour it with sandalwood enough.

Gyngerbrede is a very well known recipe from medieval times; it was regarded as a luxurious treat to give to honoured guests, being packed with expensive spices. However, as with the recipe above, some recipes don’t actually contain ginger! It may be implied by the name, or this recipe may be a variant on others that contain ginger. I have chosen to add the ginger. 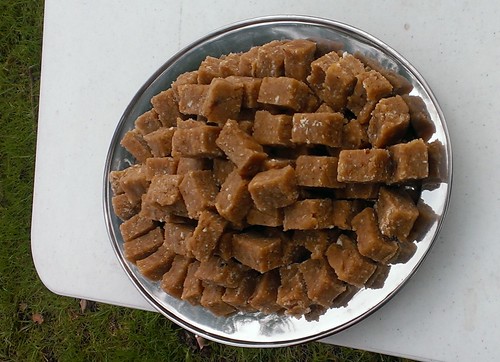 Click on the links below to buy direct from Amazon.