20. To make prince bisket.
TAke one pounde of verie fine flowers, and one pounde of fine ſugar, and eight egges, and two ſpoonfuls of Roſewater, and one ounce of carroway ſeeds, and beat it all to batter one whole hour, for the ore you beat it, the better your bread is, then bake it in coffins of white plate, being baſted with a little butter before you put in your batter, and ſo keepe it.Hugh Plat, Delightes for Ladies (1602)

20. To make prince biscuit.
Take one pound of very fine flour, and one pound of fine sugar, and eight eggs, and two spoonfuls of Rosewater, and one ounce of caraway seeds, and beat it all to batter one whole hour, for the more you beat it, the better your bread is; then bake it in coffins of white plate, being basted with a little butter before you put in your batter, and so keep it.

Bisket was originally a long lasting, but tasteless and hard to eat food, consisting of flour and water, used as food for soldiers, and there were many complaints about how inedible they were (Brears 2016, 568). They were twice cooked to make them hard enough for weevils to avoid (Spurling, 2011, 117). But then in the sixteenth century, in a form of cultural appropriation, sugar, eggs and spices were added to create a high end version that was often enjoyed at banquets. Some biskets were twice baked, similar to a modern Italian biscotti, while others were baked once, like this.

To me, the key to this recipe is the instruction to “beat all to batter one whole hour.” You don’t need to mix this for an hour, even by hand, to fully incorporate the ingredients; the only reason I can think of for beating it for so long is to get the eggs to foam, so you wind up with a lighter, fluffy end product. And the problem is, the sugar and the flour, added to the eggs, will actually impede the process of foaming the eggs (see the notes at the end). There are other, better ways to incorporate eggs, sugar and flour to create a light batter. And at least one person in the period we are talking about knew this.

To make bisket bread.
Take one pound of flower, & one pound of sugar, one ounce of annisseeds, halfe an ounce of coriander seed, mingle these together, take viii eggs beat them verie well, then put in your stuff, then beat it alltogether very well, then take dishes &annoynt them with butter & put the stuf into them, Let the oven be as hot as it is for manchet, when it is brown at top turne it & set it in againe, if you would have it light put the yolks of viii eggs more to it, & beat the sugar with the eggs, before the flower bee put in. Elinor Fettiplace’s Receipt Book, ed. Hilary Spurling, p 119.

To make bisket bread.
Take one pound of flour, one pound of sugar, one ounce of aniseeds, and half an ounce of coriander seed. Mingle these together, take 8 eggs and beat them very well. Then put in your stuff, then beat it all together very well, then take dishes and anoint them with butter, then put the stuff into them. Let the oven be as hot as it is for manchet. When it [the bisket] is brown at the top, turn it and set it in again. If you would have it light, put the yolks of 8 eggs more to it, and beat the sugar with the eggs, before the flour be put in.

This is twice baked, but leaving aside the different spices and the extra optional egg yolks, this is basically the same ingredient combination as Sir Hugh’s. However, Spurling notes the end reminder, to beat the sugar with the eggs before the flour, is an addition to the recipe text, clearly made later. And this is after Lady Fettiplace said to beat the eggs first – the order thus being beat eggs, then beat in the sugar, then the flour. My own working journal is full of extra annotations like this (when I can read the scrawl), where I have changed ingredient quantities, timings or methods. Clearly, Lady Fettiplace made some bisket bread adding the sugar and the flour at once and got an unsatisfactory result. She then added an extra note to her working journal to remind herself of the better method.

I often find Lady Fettiplace’s recipes much more trustworthy than other writers (dodgy spelling aside). What we have is her working recipe journal – as with this recipe, she made changes and additions if she found her original written recipe didn’t give the desired result. She used these recipes, and many other printed cookbooks were written by people who weren’t necessarily cooks.

There are many other versions of bisket recipe (see, for example, The Good Housewife’s Jewel pp 79-80 and Elinor Fettiplace’s Receipt Book pp 117-121). They are all similar in that they are combinations of equal amounts of flour and sugar, with many well beaten eggs, spices and rosewater. Biskets were also probably commercially available; there are recipes that use biskets without actually having a recipe. See for example A.W’s A Book of Cookrye Very Necessary for All Such as Delight Therin, which specifies in several pie or tart recipes to sprinkle bisket on top, but does not have a recipe for them.

I have seen other redactions where people change the proportion of flour to sugar, possibly influenced by modern biscuits where the biscuit mix holds its form when uncooked. But these biskets are more like a cake batter than a modern biscuit, or even an Italian biscotti. 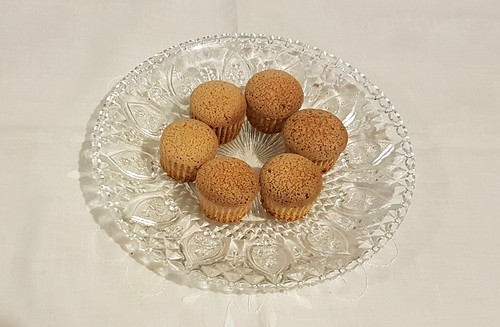 These were made in a mini muffin pan lined with paper cases, so they could be served easily for afternoon tea at a tournament. You could also make them in a tea saucer or shallow bowl, as Hugh Plat suggests in his recipe. But I suggest using more than a “little butter, because the final result will stick because of the high sugar content.

Click on the links below to buy direct from The Book Depository.
Black, Maggie (2002). The Good Housewife’s Jewel.
McGee, Harold (2004). On Food and Cooking.
Spurling, Hilary (2011). Elinor Fettiplace’s Receipt Book.
A.W. (1591). <a href="https://www.bookdepository.com/Book-of-Cookrye-Very-Necessary-for-All-Such-as-Delight-Therin-Gathered-by-W-1591-W-W-W/9781171316305?a_aid=leobalecelade&quot; target="_blank"A Book of Cookrye Very Necessary for All Such as Delight Therin.