At a recent feast I ran, I decided to serve a pig’s head breathing fire as a spectacle at a feast. I had never cooked a pig’s head before; and I wasn’t sure how it would be received. However when I mentioned it to people they got very excited so I decided I had to go ahead with it.

The first issue I had was obtaining a pig’s head. They aren’t commonly asked for, after all. However the butcher I go to for events was able to source one, and didn’t give me too weird a look; it’s not the strangest thing I’ve asked him to get for me.

The word got around the event that there would be a pig’s head and a few people came to meet it, which is how the head acquired the name Bernàrd.

I’ve never cooked a pig’s head before, and in the end I decided roasting was my best option. I knew how to roast pork, and I figured a head would roast pretty much the same. But I honestly didn’t think anyone would want to eat it – I just thought people would simply look at it, enjoy it, and that would be it. So I didn’t pay too much attention to the preparation. I simply gave Bernàrd a wash and patted him dry, then rubbed him with a commercial barbeque sauce to give him some colour. 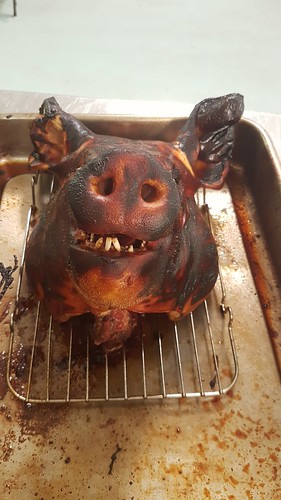 Unfortunately the spill I had prepared to stick in his mouth and light, so he appeared to be breathing fire, became too damp and simply smouldered. So he was sent out nibbling on some parsley.

And he came back with no meat left on his bones – virtually everyone at the feast wanted to try a piece of Bernàrd, and the queue went out of the hall. There were even fights about who got the last of the cheek.

I will certainly be serving a roast pig’s head once again. However next time I will be using a more period appropriate glaze, such as a Lumbard Mustard.

If you want to cook a pig’s head, you will probably need to order one specially from the butcher (be prepared for some strange looks). Make sure you specify you want it whole, with the ears, cheeks and snout attached. They roast just like normal pork, but take longer than a boned, rolled joint, as the bone acts as a heat barrier. I would also wrap the ears and nose with foil during the cooking, because as you can see Bernàrd’s wound up getting a little too crispy.

And probably get someone else to carve, because a pig’s head ain’t the easiest thing to carve. 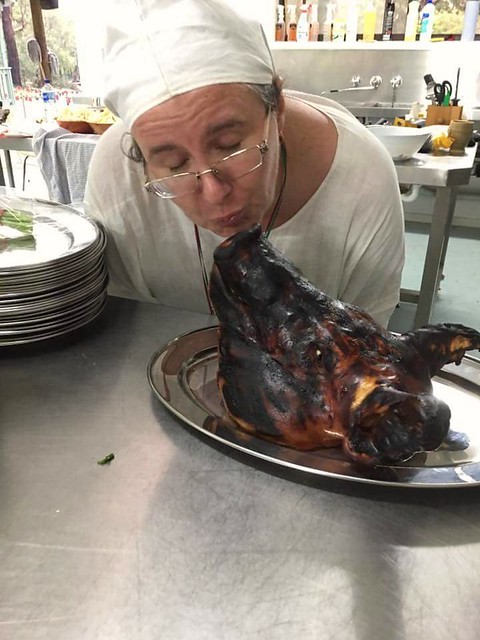