TO PICKLE MUSHROOMS
Take your Buttons, clean ym with a spunge & put ym in cold water as you clean ym, then put ym dry in a stewpan & shake a handfull of salt over ym, yn stew ym in their own liquor till they are a little tender; then strain ym from ye liquor & put ym upon a cloath to dry till they are quite cold. Make your pickle before you do your Mushrooms, yt it may be quite cold before you put ym in. The pickle must be made with White-Wine, White-Pepper, quarter’d Nutmeg, a Blade of Mace, & a Race of ginger.

Take your Buttons, clean then with a spunge and put them in cold water as you clean them, then put them dry in a stewpan and shake a handful of salt over them, then stew them in their own liquor till they are a little tender; then strain them from the liquor and put them upon a cloth to dry until they are quite cold. Make your pickle before you do your mushrooms, so it may be quite cold before you put them in. The pickle must be made with white wine, white pepper, quartered nutmeg, a blade of mace, and a race of ginger.

Contrary to popular belief, there were some vegetables that were extremely popular in Elizabethan times. One dish that was becoming more popular was the Sallat, which like modern salads were composed of leaves, vegetables such as cucumbers and mushrooms, nuts and dried fruits. They were arranged to look beautiful on a plate, but of course there were times of year when popular sallat foods simply weren’t available. This is where pickling recipes like this one would have come in – in the autumn when mushrooms were plentiful, they would have been gathered and pickled en-masse to be available all year round. 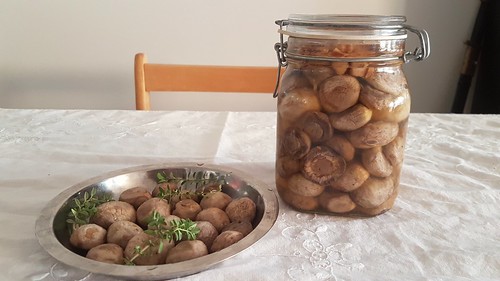 Click on the links below to buy direct from The Book Depository.
Spurling, Hilary (2011). Elinor Fettiplace’s Receipt Book.