Hulwa a’Jamiyya: Take half a pound [ratl] of flour and fry it in four ounces of sesame oil. Take a pound [ratl] of honey and put it on the fire, and if the honey is strong, add water. When it boils, throw it hot on the toasted [flour] and stir it and beat it white. [Take] poppy seeds and pistachios for it and throw them on it. Let the honey be covered with a dirham of saffron. Stir it and put it up covered. Kitab Wasf al-Atima al-Mutada Chapter X (The Description of Familiar Foods, trans. Charles Perry). Features in Medieval Arab Cookery, ed. Maxime Rodinson.

When people think of halwa (also halva, halvas or hulva) today, they think of the yummy, slightly gritty sesame-based sweet with nuts. But this is only one type of halwa – halwa literally translates as “sweet,” and refers to a dense sweet based either on flour and honey or sugar syrup, or nut butters/pastes and syrup.

One of the great problems I’ve found with redacting historical recipes is the translation of measurements. For instance, a common measurement in these recipes is the ratl, which often gets translated to “pound.” However, a ratl is NOT the same as an imperial pound, which caused bad results until I found metric equivalents. Furthermore, the same term had different meanings at different times and places, and ratl is certainly indicative of this! If you are interested in checking weights and measures, this site is a great place to start. For reference’s sake, in this recipe I have used the C12 Egyptian measurements. This is why I stick to metric measurements when I write recipes. It’s less painful. 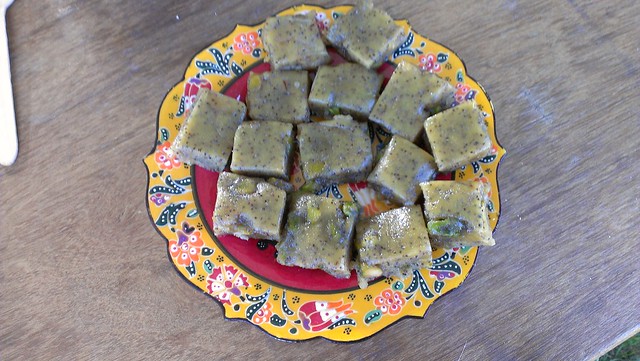 Click on the links below to buy direct from The Book Depository.
LeBau, Elizabeth (2012). The Sweet Book of Candy Making
Rodinson, Maxime (2006). Medieval Arab Cookery