97 If you would make chicken buns
Then take the meat from hens and let it cook beforehand, after that chop it small and put grated a Semmel thereon and eggs thereon, until you think that it is a good thick dough. Afterwards make fine round little balls and let them fry very slowly and roast them.

I know very little about German cooking. However, this is one of a number of recipes in Sabrina Welserin’s cookbook for bachen, which has been translated as “buns.” They appear to be balls which can be fried or roasted, so buns is as good a translation as any; a bachen containing meat, like this one, could be called a meatball.

We decided to add parmesan cheese, as recipe 193 combines cooked chicken, Parmesan cheese and spices in a dough wrapper, to be boiled (rather like ravioli or tortellini). They are equally delicious with or without the cheese. 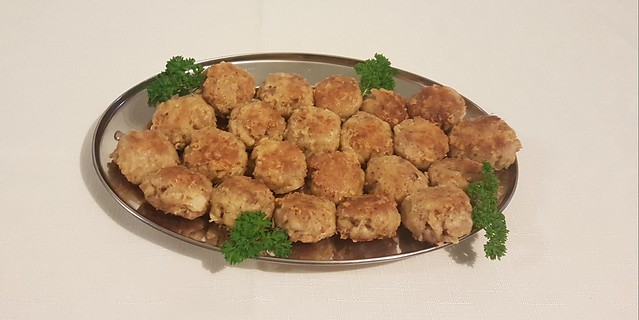