To make a tarte of Strawberries.
Wash your strawberries, and put them into your Tarte, and season them with suger, cynamon and Ginger, and put in a little red wine into them.
Thomas Dawson, The Good Huswife’s Jewell, 1596.

To make a Tart of Strawberries.
Wash your strawberries, and put them into your tart, and season them with sugar, cinnamon and ginger, and put in a little red wine into them.

89 To make a strawberry tart
Make a pastry shell and let it become firm in the tart pan. Afterwards take strawberries and lay them around on top as close together as possible, after that sweeten them especially well. Next let it bake a short while, pour Malavosia over it and let it bake a while, then it is ready.

The text of the original German recipe can be found here.

The translation of the German recipe is by Valoise Armstrong, and can be found here.

I tried cooking the Dawson recipe several times. The first time, I pureed the strawberries, sugar, wine and spices (despite there being no instructions to do so). And I used far too much wine, so the puree was extremely wet. This caused the pastry shell to completely collapse because it was far too wet. The next two times I used less wine each time, but the tart still collapsed when the pastry got soggy. 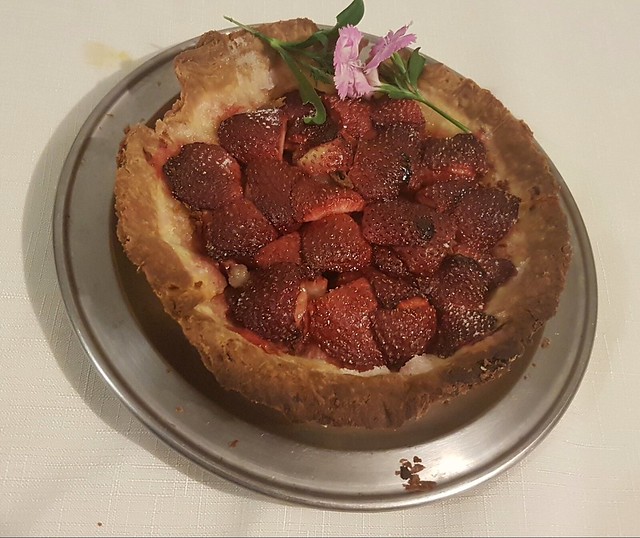 The tart is garnished with dianthus flowers, also known in Elizabethan England as gillyflowers. They are edible (rather tasteless, but they are pretty!).

Click on the links below to buy direct from The Book Depository.
Black, Maggie (1996). The Good Housewife’s Jewel
Brears, Peter (2011) All the King’s Cooks