TO MAKE FRUMENTE
Tak clene whete and braye yt wel in a morter tyl þe holes gon of; and seþe it til it breste in water. Nym it vp & lat it cole. Tak good broþ & swete mylk of kyn or of almand & tempere it þerwith. Nym ȝelkes of eyren rawe & saffroun & cast þerto; salt it; lat it nauȝt boyle after þe eyren ben cast þerinne. Messe it forth with venesoun or with fat motoun fresch. The Forme of Cury 1.

To make Frumenty
Take clean wheat and smash it well in a mortar until the hulls are gone, and boil it in water until it bursts. Take it up and let it cool. Take good broth and sweet cow or almond milk, and mix it therewith. Take yolks of eggs and saffron and cast thereto, and salt it. Do not let it boil after the eggs be cast therein. Serve it forth with venison or fat, fresh mutton.

Frumenty, or furmenty, was a staple of medieval kitchens. As the recipe above suggests, in England particularly it was served with venison. It does make an excellent accompaniment to any meat dish with a good sauce, as the frumenty absorbs the sauce well. It is a very filling dish, and can be made sweet with the addition of sugar and dried fruits.

This recipe is very similar to the one found in Pleyn Delit (78). 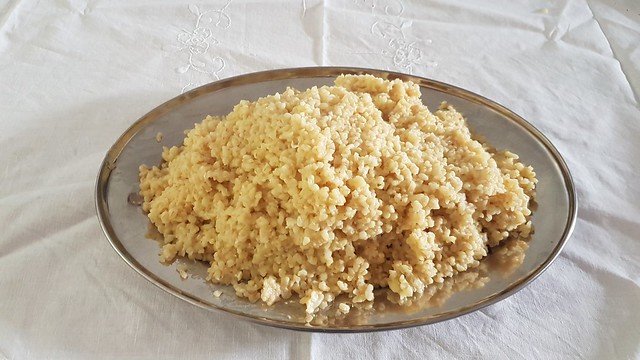