Stewed Stekes of Venson or Motoun
Cut venson or moton smale lytell thynne leshys & put them in a fryyng panne with ale by wese & boyle them welle tylle they be ny tendour. Then take them & fry them in butter tylle they be tendur; than make a syryp for them. Take rede wyne, vynegyr ynouh, and butter & put them in a put them in a pote to stew tylle they be halfe consumed; and then fors them up with synamom, ginger, & suger, and coloure hit with saforne.
Bodleian Library, MS. Rawlinson D 1222, 281.

The text of this recipe can be found in Constance Hieatt’s A Gathering of Medieval English Recipes, a wonderful collection of lesser known manuscripts and recipes of medieval English cookery. She mentions that this particular recipe is recorded in a different hand to the rest of the manuscript, and appears to be a later addition (Hieatt, 2007, 90).

Venison was the status meat of medieval Europe. It was associated with the noble pastime of hunting; to serve venison was an indication of status, as it meant a lord had been granted exclusive rights to the hunting in a particular area (Wilson, 1973, 92). It might also be given as a gift, and to avoid waste, venison was also sold in towns for the luxury market (Hammond, 1993, 39).

Venison would have been the high point of any feast; it was traditionally served with frumenty (Hieatt et al, 1996, 47), a porridge-like dish made from grains, which would have soaked up the meat juices. 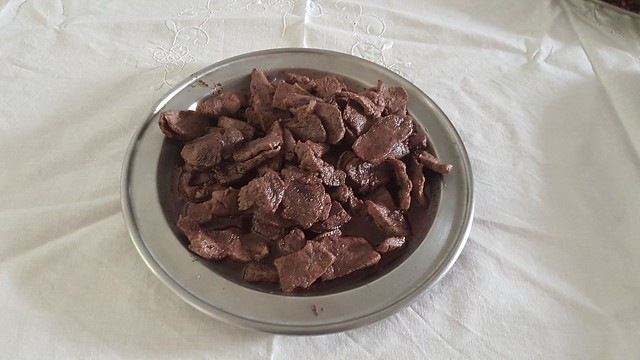