To make a sauce of tart cherries.
If you wish to make a good sauce of tart cherries, put the cherries into a pot and place it on the embers and let them boil. Then cool down again and pass them through a cloth, put it back into the pot, place it on the embers and let it boil well until it thickens. Then add honey and grated bread and cloves and good spice powder and put it into a small cask. It will stay good three or four years.

The text and translation of the recipe can be found here. The translation was done by Master Giano Balestriere (Volker Bach).

Sauces were an essential part of medieval and early modern cooking. As well as enhancing flavour, they were an essential part of healthy cooking. The practice of medicine was dominated by the theory of the four humours – fire, earth, water and air. Every food was dominated by one of these humours, some to a level that was considered dangerous. Using the right sauce with a particular dish could reign in this danger and make the food more healthful (Scully, 1995, 13). However, too much of a particular sauce could be harmful in itself! (Klemettilä, 2012, 87).

Sauces were typical accompaniments for boiled or roasted meat. Cherry sauce was a popular condiment in early modern Germany; most recipe collections contain at least one recipe (Bach, 2016, 151). Sabina Welserin’s cook book doesn’t contain a general recipe, but specifies to serve boar’s head with sour cherry sauce (recipe 5) and roast venison with a sauce that contains cherry syrup (recipe 7). This cherry sauce is quite robust, and I feel is best with strongly flavoured meats. The recipe below makes enough to be a generous accompaniment for 1kg of roast lamb. 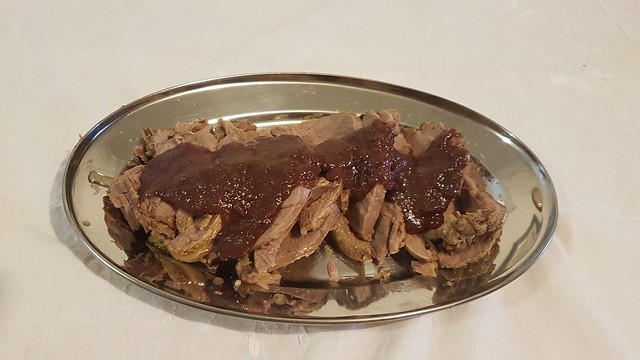 Click on the links below to buy direct from The Book Depository.
Bach, Volker (2016). The Kitchen, Food and Cooking in Reformation Germany.
Klemettilä, Hannele (2012). The Medieval Kitchen.
Scully, Terence, 1995. The Art of Cookery in the Middle Ages