79 An apple tart
Peel the apples cleanly and take out the cores, chop them small and fry them in fat, put raisins, sugar and cinnamon therein and let it bake.

This is one of a number of recipes in Sabina Welserin’s cookbook for an apple tart; presumably they were a staple fruit of the area. This particular recipe is remarkably similar to some modern apple pie or tart recipes. Do a Google search for “Apple Pie raisin” and you’ll find recipes that differ from Sabina’s only in the detail. And there is a reason why this recipe has been around for at least 500 years, because it is delicious. This would be a good recipe to serve to people who are unfamiliar with medieval food, due to its comforting familiarity.

Although Sabina doesn’t specify including a lid to the tart (making it a pie) there are other tart recipes, such as 186 (a herb tart) and 188 (a prune tart) where the maker is instructed to make a cover for the tart. We did make the tart into a pie, as this are more familiar to our eaters (and I happened to have some thawed puff pastry available). 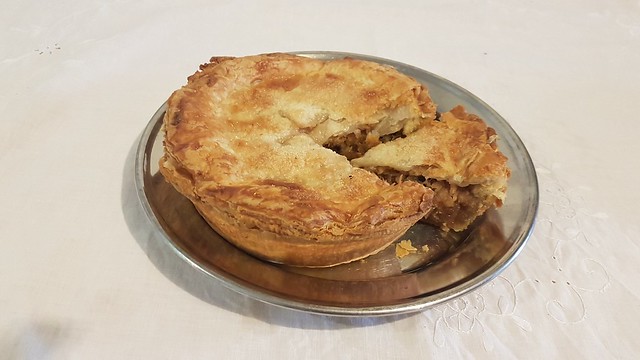