177 To make an apple tart
Take apples, peel them and grate them with a grater, afterwards fry them in fat. Then put in it as much grated cheese as apples, some ground cloves, a little ginger and cinnamon, two eggs. Stir it together well. Then prepare the dough as for a flat cake, put a small piece of fat into it so that it does not rise, and from above and below, weak heat. Let it bake slowly.

This is one of a number of recipes in Sabina Welserin’s cookbook for an apple tart; presumably they were a staple fruit of the area. But unlike the Apple Pie with Raisins, this recipe stops you in your tracks. It’s not just the unusual description of the pastry, it’s the filling – apples, with cheese?!

However, it isn’t as strange as it seems – apple is often found on cheese boards. The filling itself is a pleasant, subtle mix of sweet and savoury, and is a great way to introduce feast attendees to the practice of serving sweet dishes with meat.

Sabina’s instructions for the casing for the dish are unclear. I have chosen to interpret this dish as a typical pie, however it’s entirely possible this is meant to be a strudel, where the filling is put into the centre of the dough, and the dough is folded over to encase the filling. If anyone has any other interpretations, I’d be happy to hear from you! 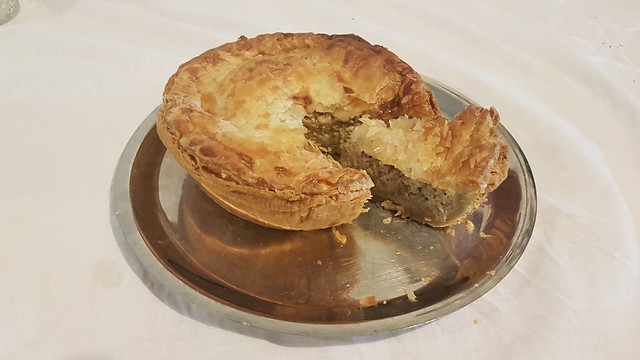 Click on the links below to buy direct from The Book Depository.
Kindstedt, Paul (2012). Cheese and Culture.
Bach, Volker (2016). The Kitchen, Food and Cooking in Reformation Germany.