Boil lentils quite slowly, put a fried onion to it, sour it, spice it, add raisins, and serve it over toasted bread as an evening meal. Balthasar Staindl, Ain künstlichs und nützlichs Kochbuch, 257.

The text of this recipe is taken from The Kitchen, Food, and Cooking in Reformation Germany (2016) by Volker Bach (p 123).

Lentils are among the oldest domesticated crops known to man, and are a useful crop, as lentils themselves are high in protein and the plants can be fed to animals. However, in the medieval period, there are very few recipes featuring them. This may be because they don’t grow well in northern Europe, or it could be that they have been associated with the poorest people for almost as long as there have been written records. However, this is also true of beans and peas, and there are multiple recipes for these. (Albala, 2007, )

This recipe, featuring expensive spices and dried fruit, could never have featured at a peasant’s table. There are a number of dishes from the medieval period that take lowly ingredients and pair them with the costliest ingredients, perhaps as a medieval joke. 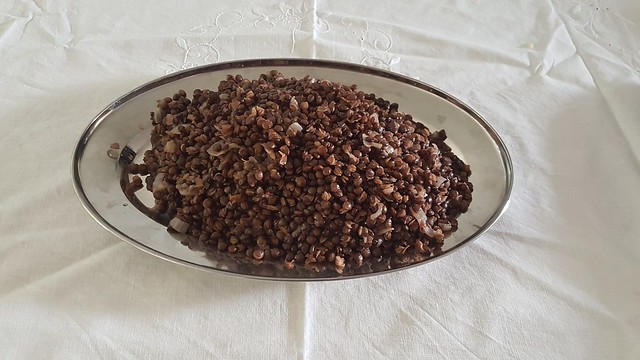 Click on the links below to buy direct from The Book Depository.
Albala, Ken (2007). Beans: a History.
Bach, Volker (2016). The Kitchen, Food and Cooking in Reformation Germany.

2 comments on “Lentils with Raisins”