Hais: Take excellent dried bread or biscuit (ka’k) and pound it well. Let there be a pound (ratl) or it and three quarters of a pound (ratl) of fresh or preserved dates – let their seeds have been removed – and three ounces (uqiya) of pounded almond and pistachio meats. Macerate everything well and strongly by hand. Then refine two ounces (uqiya) of sesame oil (by frying spices in them) and pour it on it. Knead it continuously until it is mixed. Make it into balls and dust them in finely pounded sugar. If you want, replace the sesame oil with clarified butter. This is good for travelers. Kitab al Tabikh Chapter X (The Book of Dishes, trans. Charles Perry and published as A Baghdad Cookery Book).

In Middle Eastern cultures, sweet dishes are not served at the end of the meal – instead fresh fruit is eaten. Dishes such as these tend to be reserved for celebrations or social occasions, and are an important part of guest hospitality. However sweet dishes are not exclusively served only at special times – they can be eaten whenever desired (Salloum et all, 2013, 1).

Hais developed from a Bedouin dish (Salloum et all, 2013, 211), as suggested by the direction that it is good for travelers. No doubt the Bedouin version was much simpler than the Baghdad version. 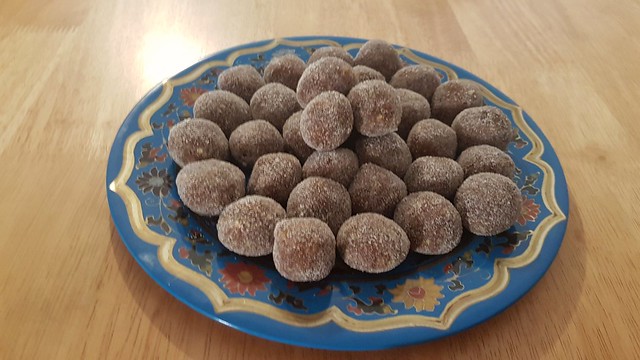 Click on the links below to buy direct from The Book Depository.
Perry, Charles (2005). A Baghdad Cookery Book.
Salloum, Habeeb; Salloum, Muna and Salloum Elias, Leila (2013). Sweet Delights from a Thousand and One Nights.