Bāqillā bi-Khall: Take green broad beans as soon as they are rough. Remove their external husks, then boil them in salt and water until they are done, and dry them off. Sprinkle a little caraway and finely pounded cinnamon on them. Pour a bit of sesame oil on them. Put good vinegar to cover on them, and use them. Kitab al Tabikh Chapter VII (The Book of Dishes, trans. Charles Perry and published as A Baghdad Cookery Book).

Anyone who has ever used broadbeans can work out quickly why they were largely replaced with New World varieties. Within the pods, each bean is enclosed by a hard, pale skin which should be removed before they are eaten, and this becomes incredibly tedious to do in quantity. However, anyone who has tasted broadbeans can work out why they never fell completely out of use – they are extremely delicious!

This dish would have been classed as a bārida, a cold dish with a vinegar based sauce, served at the start of a meal as an appetiser (Zaouali, 2007, 63). 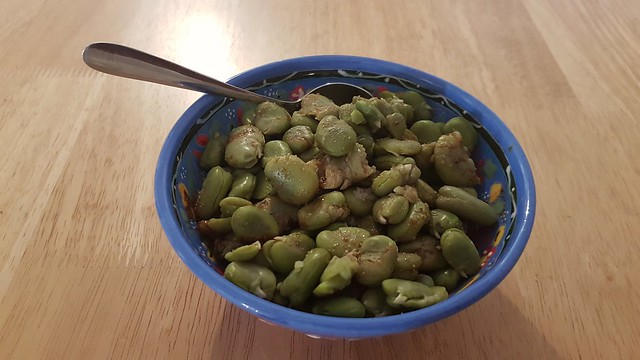 Click on the links below to buy direct from The Book Depository.
Perry, Charles (2005). A Baghdad Cookery Book.
Zaouali, Lilia (2007). Medieval Cuisine of the Islamic World.