Jurjaniyya: The way to make it is to cut up meat medium and leave it in the pot, and put water to cover on it with a little salt. Cut onions into dainty pieces, and when the pot boils, put the onions on it, and dry coriander, pepper, ginger and cinnamon, all pounded fine. If you want, add peeled carrots from which the woody interior has been removed, chopped medium. Then stir it until the ingredients are done. When it is done, take seeds of pomegranates and black raisins in equal proportion and pound them fine, macerate well in water and strain through a fine sieve. Then throw them into a pot. Let there be a little bit of vinegar with it. Beat peeled sweet almonds to liquid consistency with water, then throw them into the pot. When it boils and is nearly done, sweeten it with a little sugar, enough to make it pleasant. Throw a handful of jujubes on top of the pot and sprinkle a little rosewater on it. Then cover it until it grows quiet on a fire, and take it up. Kitab al Tabikh Chapter I (The Book of Dishes, trans. Charles Perry and published as A Baghdad Cookery Book). 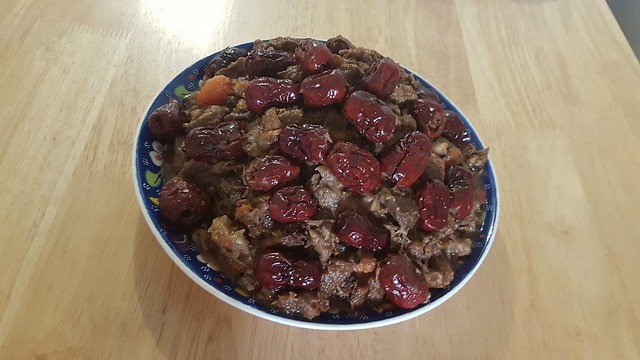 Click on the links below to buy direct from The Book Depository.
Perry, Charles (2005). A Baghdad Cookery Book.