Knead sugar, almonds, samid and clarified butter, equal parts, and make them like breasts, and arrange them on a brass tray. Put it in the bread oven until done, and take it out. It comes out excellently.
Kitab Wasf al-Atima al-Mutada Chapter XI (The Description of Familiar Foods, trans. Charles Perry)
Features in Medieival Arab Cookery, ed. Maxime Rodinson.

If I had to nominate a signature dish, this would probably be it. I have cooked this dish multiple times, and handed out the recipe many times as well (you can find the original recipe, along with the story of its development, here). It’s an easy recipe, the biscuits are delicious, and there is room for as much innuendo as you please.

However, the texture was slightly grainy. I put this down to the sugar, because it’s difficult to cream clarified butter and sugar together, and the sugar doesn’t completely dissolve. I have recently been revisiting Middle Eastern cooking with one of my apprentices, and I noticed there are recipes in various sources calling for powdered sugar (which in Australia is known as icing sugar). Knowing powdered sugar dissolves very quickly in any liquid (such as clarified butter), I wondered whether replacing the caster sugar with icing sugar would give a better result. It does. The resulting biscuits have a much smoother texture, and are easier to shape as the mix is moister. 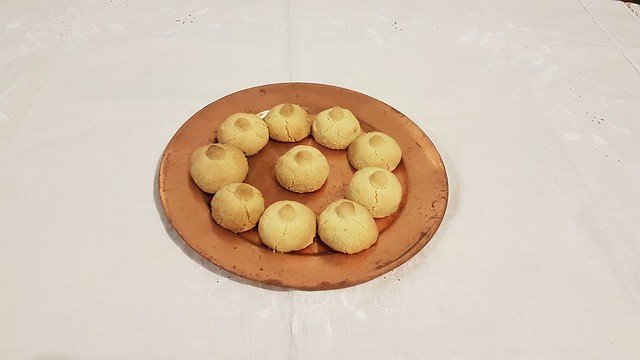