Thicken dissolved sugar or honey on a quiet fire to the degree that when a piece of it is taken and cooled, it breaks and shatters. Then knead what you want of sesame, walnuts, pistachios, almonds and poppy seeds with it. It cools and is taken up. Kitab Wasf al-Atima al-Mutada Chapter X (The Description of Familiar Foods) 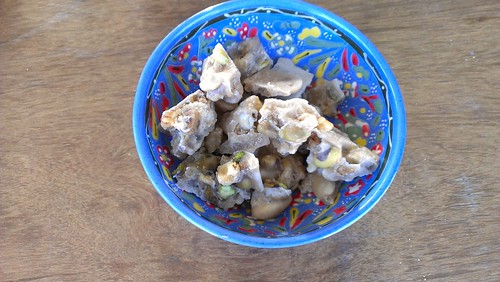 Click on the links below to buy direct from The Book Depository.
Nasrallah, Nawal (2009) Annals of the Caliphs’ Kitchens
Rodinson, Maxime Medieval Arab Cookery

Cook the chickpeas in water, then mash them in a mortar to make a puree. Push the puree through a sieve for wheat, unless it is already fine enough, in which case this step is not necessary. Mix it then with wine vinegar, the pulp of pickled lemons, and cinnamon, pepper, ginger, parsley of the best quality, mint, and rue that have all been chopped and placed on the surface of the serving dish [zubdiyya]. Finally, pour over [this mixture] a generous amount of oil of good quality.

This recipe comes from the thirteenth century Kanz al-Fawa id fi tanwi’ al-mawa id (“The Treasure of Useful Advice for the Composition of a Varied Table”) which was written in Egypt. It can be found in Lilia Zaouali’s Medieval Cuisine of the Islamic World (p 66).

A C13 zubdiyya from Syria 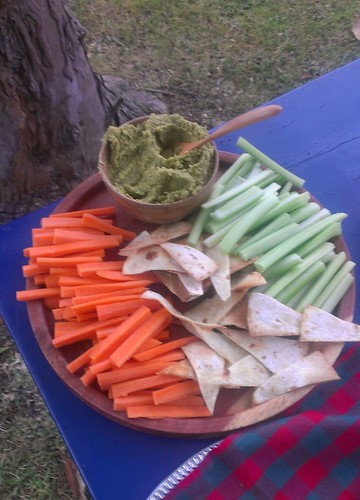 This recipe is from the Kanz al-Fawa-id fi tanwi al-mawa’id (“The Treasure of Useful Advice for the Composition of a Varied Table.”) It can be found on p. 79-80 of Lilia Zaouali’s Medieval Cuisine of the Islamic World.

You need meat and mint. Blanch the meat, brown it in a little oil, then pour its broth over it. Mix honey, pistachios, atraf tib, some starch, saffron, and pepper in a little vinegar. Add this mixture to the meat and cook until it thickens.

This recipe comes from Lilia Zaouali’s Medieval Cuisine of the Islamic World.  The original source is Kanz al-Faxa’id fi tanwi al-mawa’id (“The Treasure of Useful Advice for the Composition of a Varied Table,”) which was compiled in thirteenth century Egypt or Syria.  This dish would have been served as an appetiser in a Middle Eastern banquet.

Get some carrots, [the] white [part of some] leeks, tahina, wine vinegar and atarif tib. Slice the carrots and boil them. Take the [green] tops of the leeks and boil them separately, then drain them and soften them in sesame oil. Put the tahina in a dish, sprinkle it with boiling water, and mix it by hand so the sesame oil can express itself; then add a little vinegar, honey and some atarif tib. Put the drained carrots and leeks in a serving dish and add the tahina. You must do [this] in such a way that the quantity of carrots and leeks suits that of the condiments.

Slice the entire leek into rounds, keeping the white and green separate, and was thoroughly.  Peel carrots and add to cold water.  Bring to the boil, then add the whites of the leek.  After a couple of minutes, remove from the water and drain them – the carrots should have started to soften but still have some resistance.  Slice the carrots into rounds.  Boil the green leek tops for around 5 minutes, then drain, and fry in virgin sesame oil until they’ve gone really soft and lost a lot of their green.

To make the dressing, put the tahini in a bowl with the boiling water (preferably not the vegetable water – see notes) and stir until the tahini is nicely liquid.  Add more water if your tahini is really solid.  Add the wine vinegar, honey and atarif tib, then pour over the combined carrot and leeks.  Can be served either hot or cold.

Prep ahead of time?  Yes. 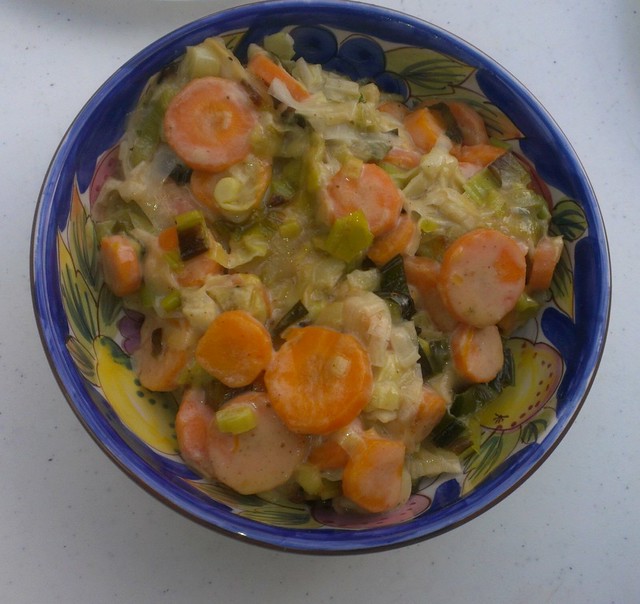