A good way to powder or barréll beefe.
TAke the beefe and lay it in mere sawce a day & a night. Then take out the beefe and lay it vpon a hirdle, and couer it close with a sheete, and let the hurdle be laid vpon a peuerell or couer to saue the mere sauce that commeth from it: then seeth the brine, and lay in your Beefe againe, see the brine be colde so let it lye two dayes and one night: then take it out, & lay it againe on a hurdel two or three dayes. Then wype it euerie peece with linnen cloth, dry them and couch it with salt, a laying of Beefe and another of salt: and ye must lay a stick crosse each way, so that the brine may run from the salt.
The good Huswifes Handmaide for the Kitchin, 1594

Take the beef and lay it in mere sauce a day & a night. Then take out the beef and lay it upon a rack, and cover it close with a sheet, and let the rack be laid upon a bowl to save the mere sauce that comes from it: then bring the brine to the boil, and lay in your beef again, see the brine be cold so let it lie two days and one night: then take it out, & lay it again on a rack two or three days. Then wipe it every piece with linen cloth, dry them and cover it with salt, a laying of beef and another of salt: and you must lay a stick across each way, so that the brine may run from the salt.

The text of the original recipe comes from the transcript by Sam Wallace, available here.

“Powdered Beef” is listed as a suggested dish to serve in the first course of a feast in A Proper New Booke of Cokerye, A Book of Cookrye and The Good Huswifes Jewell part 1. However, none of these books contain a recipe for this dish. This indicated to me that a household manager would receive the Powdered Beef readily prepared (perhaps from the butcher who sold the meat) – it wasn’t made by the kitchen staff.

However, given it was clearly an important part of most feasts, I set out to find out what it was, and whether I could make it. I found the recipe above, from which I concluded Powdered Beef was clearly preserved beef, similar to modern corned beef; the beef is soaked for several days in a brine solution, then packed in salt.

However, this method did not contain a recipe for the brine solution, or “mere sauce.” What was a mere sauce, precisely? In the glossary of the printed, annotated edition of The English Housewife, I discovered a “mere sauce” was a marinade (Markham and Best, 1994, 305). I also discovered a recipe for baked red deer, where the deer is soaked in a mere sauce for a night; this mere sauce consisted of vinegar, beer and salt (Markham and Best, 1994, 98).

Even though this recipe uses red deer, I wasn’t sure about the mere sauce using beer; it did not seem “refined” enough. I remembered a recipe for a wet brine Australian chef Adrian Richardson suggests for beef which is based on red wine (Richardson, 2009,246), which was very easy to adapt into an Elizabethan recipe; I just needed to substitute appropriate spices for allspice. Richardson uses this recipe for bresaola (p251), or air dried beef, and the process of soaking the beef is very similar to the method described in the Good Huswife’s Handmaide.

I made this for a Lochac cooking competition, and I had no idea how it was going to turn out until I opened the container to set up for the competition. We discovered you could actually eat the meat without cooking it – the long soak in the mere sauce and then the salting basically “cooks” the meat, similar to bresaola.

I intend to try this again, using the beer and vinegar mere sauce, and seeing how the beef goes in a pottage. This would also be a great way of preserving meat for camping if you don’t want to use an esky/fridge/cooler.

1.5 kg boned beef joint, such as topside, rump or silverside

For the mere sauce: 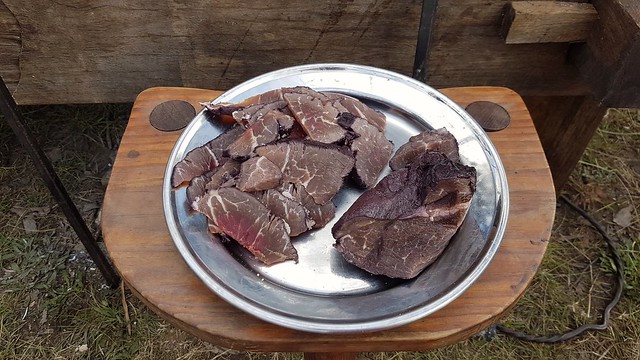